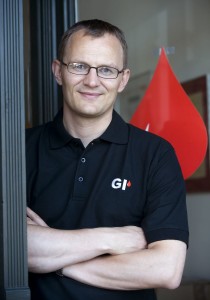 Out of a total population of 5.5 million inhabitants, nearly 230,000 Danes are registered as   blood-donors. That is approximately 7% of the adult population between the ages of 17 and 67. The aim is to ensure that Denmark is self-sufficient in blood products.

“This is mainly due to ethical reasons, since Denmark does not want to exploit donors from countries, which is in need of blood themselves. But also for safety reasons, since the regulations for blood-donation in Denmark are well established and controlled”- says the Secretary General for the National Danish Blood Donor Association (NDBDA), Jesper Villumsen.

NDBDA is a non-profit national association working independently of governmental authorities. The main aim of the association is to secure a sufficient number of blood donors anywhere in the country at any time.

In search of male donors

To cover the needs of approximately 300.000 donations that take place every year, each donor in average is bled 1.54 times a year. The frequency varies, however, as demand is greater in the large cities, where hospitals of national importance are located, and where, at the same time, donor-recruitment is more difficult than in the rural areas.

About 10% of the donors stop donating each year because of illness or age. Therefore there is a need for about 25,000 new blood-donors on a yearly basis. The blood banks would like to see more men among the donors. Only one-third of the new donors are male.

“Generally men can give blood more frequently, as they have a larger volume than women. And they continue longer as donors, because women are in risk of running into long quarantine periods during pregnancy. We would like to have a gender balance, so we are somewhat behind,” says Jesper Villumsen.

Many Danish men claim they are afraid of needles.

“I have met young men that almost fainted just because we were talking about if they would consider signing up as donors,” Jesper Villumsen points out.

It started with 200 donors

It was a group of adult scouts, inspired by the British Rovers, who came up with the idea of voluntary blood donation in 1932 and started donor associations in affiliation with local hospitals.

The need for new donors was not an issue when blood-donation started in Denmark. In the beginning it was considered sufficient to have approximately 200 donors.

As demand grew rapidly, especially after the Second World War, a number of other national organizations engaged themselves in donor recruitment. In 1952 the national association was created to further the cause of voluntary, non remunerated blood giving.

Full anonymity between donor and patient

The association works continuously to protect the legitimate interest of blood donors. The association secures the full anonymity between donor and patient, considering that the blood is a gift from the donor to an unknown receiver.

Accordingly, all Danish blood donors are voluntary and non-remunerated, but the regional authorities, which run the Danish public hospitals, pay a small fee per donation to the local donor-association to cover administration, publicity, badges etc.

The consumption of blood

The blood donors associations and the blood banks have through many years pursued a very high information activity towards the donors to ensure exact knowledge about factors which prohibit blood-donation.

In Denmark there is almost NO outdating of blood units once they have been accepted for use. In the last year, only 200 units out of 355,000 units were not used in at least one of its components, and in the Copenhagen-area the outdating was even lower since 99.994% of the blood was used.

It is considered to be very important for donor motivation that all blood is used – and surplus production is avoided since exportation of blood from Denmark is only allowed for emergencies.

Blood will be handed out

Blood consumption has evolved greatly since its inception in Denmark 1932. At that time, the daily consumption was 0.06 liters. Today the amount is 575 liters.
This summer at The People Meeting (Folkemödet) – an annual political festival on the small Danish island Bornholm – the National Danish Blood Donor Association will be handing out free red soda – equivalent to the 575 liters of blood that are bled every day in Denmark.