Blood around the World

The term ‘blood group’ refers to the variations in the structures of the proteins and sugars on the surface of our red blood cells. These variations are inherited. There are 30 human blood group systems and each person has a unique spectrum of blood groups with the exception of identical twins or triplets whose blood groups are exactly the same.

The purpose of blood groups is not known. Animals also have blood groups, but these are not the same as human blood groups. So blood from one species cannot be safely transfused to another species and any attempt to do so would probably be lethal.

The most important human blood group system for transfusion or transplantation is the ABO system. Every human being is of blood group O, A, B or AB, or of one of the minor variants of these four groups. In fact there are only two determinants in the ABO system: A and B. O is the absence of either A or B, and AB is the presence of both A and B on the red cells. The A and B determinants differ only in minor ways.

The ABO blood groups are most important in transfusion because very early in life everybody who lacks either A or B develops antibodies against the A and B substances they lack. So, group O people develop anti-A and anti-B, group A develop anti-B, and group B develop anti-A. The very small proportion of group AB people have neither antibody. Thus, for example group A blood is dangerous if given to a group O person because the anti-A in the plasma of the group O person will rapidly destroy the transfused group A red cells. As well as on blood cells, ABO blood groups are present on other tissues and, unless special precautions are taken, a group A kidney transplanted to a group O patient will be rapidly rejected.

The distribution of the ABO groups in England is about 45% A, 43% O, 9% B, and 3% AB, though this will vary slightly in different parts of the country. The distribution, however, differs significantly around the world, with higher levels of B in Asia and more O in Africa and in native Americans and Australians (see figure). 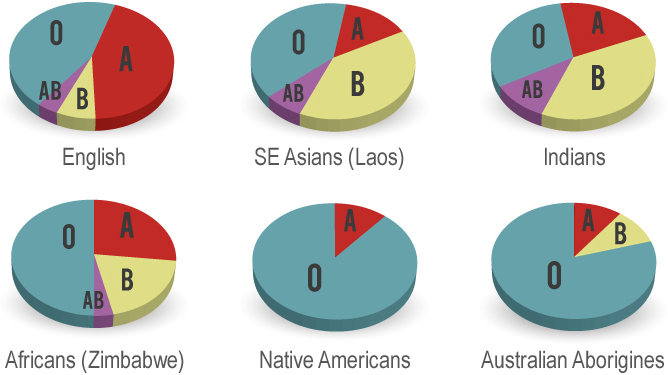 How the ABO blood groups evolved is not known. We can be pretty certain that blood group A came before O in evolution, yet O is more common than A in many populations of the world. One possible explanation for this, which is supported by substantial evidence, is that group O people are marginally more resistant to malaria than group A people, giving group O a slight advantage in area where malaria is endemic. In fact, there is a geographical trend for group O to be more common than A in those countries where malaria is common.

The second most important blood group system in transfusion, though of little significance in transplantation, is the system that used to be called Rhesus, because it was originally believed to be similar to blood groups in rhesus monkeys, but now simply called Rh. In the UK about 85% of people are Rh-positive and 15% are Rh-negative. Rh is particularly important in pregnancy because when an Rh-negative woman gives birth to an Rh-positive baby she may develop antibodies that can harm Rh-positive babies in future pregnancies. Paradoxically, injecting these mothers with antibodies during and after the pregnancy prevents them from making the potentially harmful antibodies. In the Far East Rh-negative is rare and so there are very few problems associated with pregnancy and the Rh blood group.

There are many other blood group systems designated by a plethora of different symbols. Because blood groups are inherited, some blood groups are particularly prominent in people of one race or ethnic background. People of Afro-Caribbean ethnic origin are more likely to suffer from an inherited disease known as sickle cell anaemia than people of other ethnic groups. These patients may require regular blood transfusions and, as a result of these transfusions in the UK, may develop antibodies to various blood groups that are common in people of Northern European origin. If this happens then blood from Afro-Caribbean donors is most suitable for future transfusions.

There are other conditions such as thalassaemia, where regular transfusion is essential. Thalassaemia is more common in people of Greek origin and those from the Indian subcontinent than in Northern Europeans. It is therefore important that we collect blood from people of all ethnic minority communities in the UK, so that sufficient blood is available for the treatment of patients from those communities who require regular transfusions and have developed blood group antibodies. 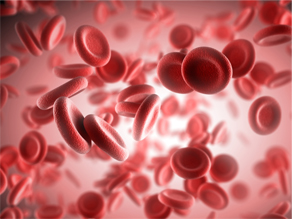